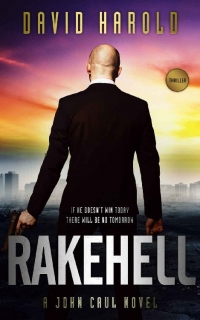 Packed with edge-of-your-seat suspense, explosive action and razor-sharp plotting, Rakehell is a weapons grade thriller which debuts an antihero to rival James Bond, Jason Bourne, or Jack Reacher.
John Caul operates under a ‘Blanket7’ licence to commit any crime in the service of the British state.
He’ll take any risk to complete the mission. But after too much action, he’s burning out — and his bosses are about to cut him loose.

When a simple case goes badly wrong, Caul must race for clues across the globe, pushing his resources, and his endurance, to the limit.
Now, Caul is going to need to break all the rules to uncover a secret being kept by political superpowers and international criminals alike, and try to stop a hammer blow that will crack the world…