Psycho By the Sea by Lynne Truss 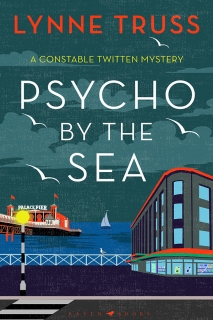 It’s September in Brighton and the city is playing host to weeks of endless rain and lashings of villainy.

A trusted member of a local gang has disappeared part way through planning a huge heist; a violent criminal obsessed with boiling the heads of policemen has escaped Broadmoor and is rumoured to be headed towards the city, while at Gosling’s department store an American researcher has been found dead in the music section.

Inspector Steine has other things on his mind – since the triumphant conclusion to his last case, Steine has so many awards and invitations coming his way that he has had to take on a secretary – but Sergeant Brunswick and Constable ‘Clever Clogs’ Twitten are both on the case.
If only they could work out just who is behind these dastardly acts…