Protected In The Water by Chase Waters 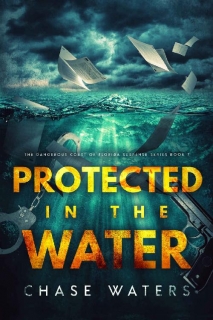 Miami private investigator and former EMT John Godwin doesn’t save lives anymore, and now that he’s experienced being at the center of several high-profile cases, he’s happy to have settled into a routine with a new house, girlfriend, and boring run-of-the-mill cases.

But when Zeke, his formal rival and now best friend on the police force, becomes the subject of an unusual hit, John finds himself in the position of having to protect one of Miami’s finest while hunting down the threat, who is one of their very own.
If that isn’t hard enough, a body turns up, murdered in the exact almost ritualistic way a note threatened to do to Zeke, and before the night is over, a second cop dies the same way. It becomes clear this killer has a list, and Zeke’s name is still on it.

John must track down a killer while fighting the tight-lipped and often volatile Miami PD who don’t appreciate an outsider butting into their personal lives or one of their investigations. But with his friend’s life at stake, John has to pull out all the stops, even if it means putting himself in the line of fire.