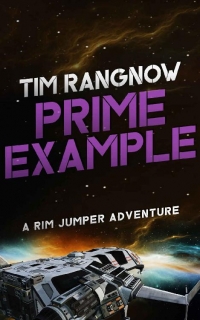 Even the best bounty hunter in the galaxy can be surprised by the unexpected.
Attacked and left for dead in the blackness of space, bounty hunter Kole Anwynn races to pursue the ship that came out of nowhere. There are many in the galaxy who would want him dead, but his wounded pride won’t let him forgive the attempt.

When the trail leads him to a backwater planet on the galactic Rim, he goes in search of a local guide. The young taxi driver he finds, with her pink dreadlocks and equally vibrant personality, uses her knowledge of the underworld to assist his hunt for the unknown assassin. From a small-time crime boss to a web of intrigue that spreads across dozens of systems, they have their work cut out for them.

Treachery and betrayal await Kole, along with a choice that he never thought to face. Will the end of his hunt be more unexpected than the beginning?