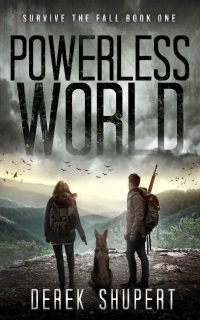 A single Coronal Mass Ejection…
…was all it took to bring down the grid.
Will Russell survive as his plane falls from the sky?
It had been twelve-months since the worst day in Russell’s life. The anniversary of his daughter’s death sent him into the bottle. He loved his wife, but they grieved in different ways. Would the pain ever stop?
Sarah missed Russell.

She lay in bed unable to sleep. The heart ache had nearly broken her, too, but Sarah didn’t want their marriage to end. If she could just get him to stop drinking. Could they learn to live again?
One day later…
…everything changed.

Russell was on a plane heading west. The engines stopped, the plane was going down, and all he could think about was Sarah. He had to see her again.
On the Boston subway, Sarah, was trapped.
Fear and panic were all around her. Sarah sensed the danger. A man glared at her. With a deep breath, she wrapped her fingers around the Glock-43 in her purse. Sarah wasn’t afraid.
Will Russell and Sarah live long enough to find their way back to each other?