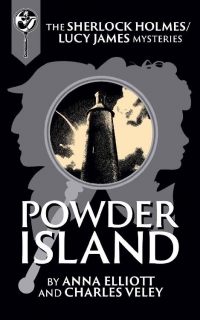 A mysterious explosion. A wounded ally. And the rise of a new and powerful enemy . .
When an unforeseen blast destroys part of England’s largest gunpowder factory, Inspector Gregson, a former ally of Sherlock Holmes, is put on the case. Holmes waits for a call to help Gregson investigate, but the call never comes. Soon Gregson will be demoted to a lowly beat patrolman, walking the streets of Whitechapel.

Nine months later, the factory owner comes to Holmes for help. He has rebuilt the demolished structure and needs to resume operations. But he’s received an anonymous note threatening another explosion.
All known suspects have iron-clad alibis, and there are no other leads. If the culprit is not caught, the factory may never reopen, and the livelihoods of four hundred workers and their families will vanish permanently.

Then Gregson is brutally stabbed in a Whitechapel alley. More mysterious circumstances unfold. Holmes realizes the Baker Street team is up against a powerful and complex enemy who will stop at nothing to avoid being caught.
Can the team unmask the malefactor before more damage is done? Or will all their efforts go up in smoke?