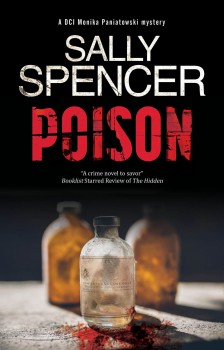 DCI Monika Paniatowski faces an old enemy – and makes a fatal mistake with the potential to poison her whole career.

Jordan Gough is an important man. He’s the town’s biggest benefactor. He is the proprietor of the Whitebridge Evening Telegraph. He owns the local football team. He is also, DCI Monika Paniatowski thinks, as bent as a corkscrew – and if she had any evidence, she’d put him away like a shot. A single encounter with him as a young detective sergeant left an impression she’s never forgotten. And neither, she is certain, has he.

So when Jordan calls and demands to speak to Monika – and only Monika – she is on immediate high alert. He claims someone’s trying to kill him, but why has he destroyed the evidence? Why turn for help to an officer he hates? Certain she’s the target of a twisted practical joke, Monika makes a terrible mistake – one that could destroy everything she holds dear.

The fourteenth DCI Monika Paniatowski mystery is a powerful and dark tale of revenge, secrets and lies, which grips you tight as it reveals twist after stunning twist.