Point of No Return by John Carson 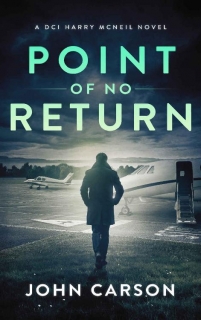 An old mystery solved after thirty-five years. And a new one just beginning…
Millionaire Murdo Wolf took off in a small plane from the island where he lived, and neither he nor the plane was ever seen again. Until now.
The Wolf family have gathered on the island they used to call home. They’re celebrating the life of their father, Oliver Wolf, who died six months ago.

Now, one of Oliver’s sons has been murdered. And when his body is discovered, so is the body of his grandfather. Did the son know where his grandfather was hidden? Did he die because of it?
DCI Harry McNeil is sent to the island to investigate the cold case and track down a killer who may or may not still be there.

Helping with the investigation are two detectives from Glasgow, DCI Jimmy Dunbar and DS Robbie Evans.
This isn’t an open-and-shut case and they discover the killer is still lurking on the island, and the body count is increasing. But with no clear motive and no direct links to the patriarch going missing all those years ago, this is going to be one of the hardest cases Harry has ever worked on.