Plane in the Lake by Neil Turner 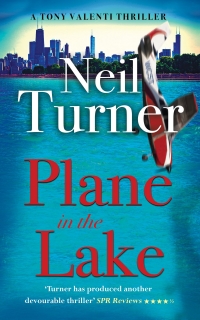 A loving family taking a little boy on his first airplane ride. A rookie pilot desperate to sleep off too much champagne from last night’s party. A sightseeing flight over Lake Michigan. What could go wrong?

When the well-heeled owners of a crashed tour plane seek to pin the blame on the two-man team that does their maintenance, Tony Valenti is called in to defend the outgunned partners. He’s up against one of Chicago’s preeminent law firms, a win-at-all-costs legal behemoth with resources that dwarf those of Tony’s mom and pop law firm. Only the truth can save his clients, yet Tony’s search for facts is thwarted at every turn by adversaries who will stop at nothing to win.

Tony is already on the ropes when he makes the startling discovery that his rivals include a stealthy entity far more dangerous than a corrupt corporation and its lawyers. Now he’s not only fighting to win a lawsuit… he’s suddenly in a race to save the lives of the most precious people in his life.