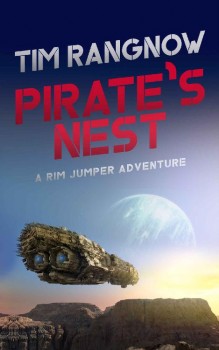 The bounty hunter becomes a pirate.
At the end of a successful job, Kole and Neela are surprised to find a Hegemony cruiser orbiting the Outer Rim planet they’re taking their bounty to. Even more shocking is the assault shuttle that quickly detaches from the cruiser, along with a warning that Rim Jumper is about to be boarded.

The Intelligence officer who arrives on the ship pulls Kole aside to brief him on a difficult job she says only he can do. Kole has to join a group of pirates, find a way to meet their secretive leader, and then report back to Hegemony Intelligence with the location of the pirate’s hidden base.
Kole enters the job with a determination to put an end to the attacks the Hegemony officer tells him about. What he finds during his search makes him question everything he’s always taken for granted. Is he fighting for the wrong side?