Pieces of Eight by Peter Hartog 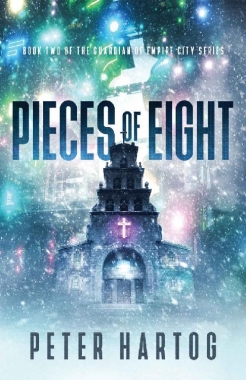 How do you stop a killer who’s already dead?
Some secrets never die. When the mutilated corpse of an ex-con is found in the bowels of an old church, haunting Biblical verses scrawled at the crime scene speak of divine retribution, and a killer hellbent on revenge. For Special Crimes detective Tom “Doc” Holliday doesn’t need his fickle clairvoyance to see that a murder like this is only the beginning.

With few leads and fewer suspects, Holliday and his quirky team of paranormal specialists embark upon an investigation that will lead them down a dark and twisted path, and test the bonds of family and friendship. From the frozen streets of Little Odessa to the diabolical wealth of Park Avenue, Holliday will need more than his Insight to hunt down an unstoppable killer.

But when Holliday suspects the killer might not be what it seems, he’ll have to unravel a twisted web of greed and lies to save an innocent soul, or lose his own, and watch his world die.