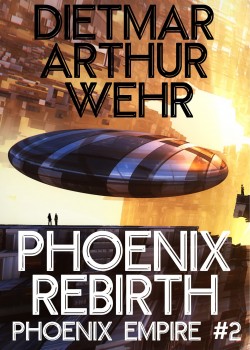 Phoenix Rebirth continues the thrilling military SF series that started in Phoenix Dawn. With the results of the Battle For Earth still reverberating throughout human space, power players scramble to fill the new power vacuum. Earth has a new leader and a new vision, the autocratic Terran Imperium. The rebel vision of a new coalition of planets modeled after the democratic System States Alliance seems further away from realization than ever as Aren Bentrik’s former rebel comrades pursue their own dreams of glory.

Bentrik still has his Merlin super-computer to guide him, but only a small powerbase with limited resources is available to exploit Merlin’s strategic moves. The Terran Imperium, on the other hand, has massive resources, and it has a Merlin-type super-computer too. All sides are building up their strength for the inevitable military showdown that will determine whether human civilization soars to new heights or comes crashing down into chaos and anarchy.