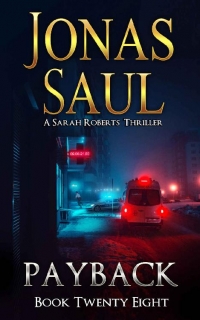 Sarah Roberts has disappeared without a trace.
When Aaron and Darwin attempt to find her, they learn that Alex is gone, too.

Days later, Aaron watches live coverage of a break-in involving a woman who appears to be Sarah. The news coverage continues with footage of Sarah kidnapping an autistic man from a special needs center at gunpoint. Then, witnesses place Sarah at the scene of multiple murders.
Authorities are now appealing for Sarah Roberts to turn herself in.

As the hunt for Sarah escalates, Darwin posits a theory that this is payback for something that happened weeks ago—something personal to Sarah—and she won’t stop until those responsible have paid in full.
The problem is, they’re powerful men, and even with Alex by her side, the two of them aren’t enough. Sarah needs an army to beat the people she’s after, or they will kill her.
Payback can be a bitch, but Sarah has never had an issue filling those shoes before …