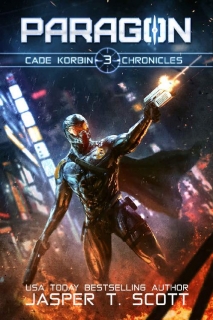 THE FATE OF THE GALAXY IS IN HIS HANDS
Cade Korbin is playing for keeps this time. If he doesn’t find a way to eliminate Nadine Zabelle once and for all, she will be the death of him and everyone he cares about.
Armed with a suit of armor from the long-dead Priors and a mysterious sample of sentient, self-replicating nano bots, he accidentally discovers what killed the Priors—
Omnipotence.

But Nadine isn’t an easy woman to reach, and she’s determined to break Cade along the way.
Meanwhile, the galaxy itself is under threat from a savage swarm of replicating machines, and a fight over the alien Gateway that was built to keep the swarm in check is fast drawing the galaxy into a violent war that could end billions of lives.

But the shocking truth of what lies beyond the Gateway could spell the end for everyone else. Ultimately, Cade will have to choose between using his newfound power to save the people who matter most to him, or saving the innocent multitudes who will die if he doesn’t intervene.