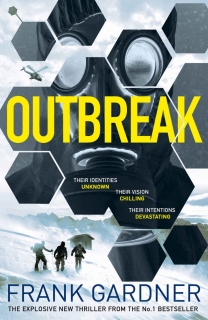 The explosive new thriller featuring MI6 operative Luke Carlton on his most terrifying mission yet.

Deep within the Arctic Circle, three environmental scientists from the UK’s Arctic Research Station trudge through a blizzard landscape in search of shelter.
There’s a cabin ahead.
It appears abandoned.
No lights or tell tale smoke.
No snow-cat outside.

The first thing Dr Sheila Mackenzie notices when she enters is the smell. It’s rank, rotting. And then there’s movement. There’s a man lying there. Barely recognisable, his face is disfigured by livid pustules, rivulets of blood run from his nostrils, his chest is covered in black bile. Momentarily Dr Mackenzie can’t comprehend what she’s seeing. Then the alarm bells begin to ring: these are signs of chronic, deadly infection . . .

And the man is trying to say something.
She edges closer, and it’s then that the convulsions begin.
He coughs suddenly, violently, vomiting out a rank mix of blood, bile and mucus . . .

Contaminating Dr Mackenzie and her two companions . . .
Setting in train a chain of events that threatens millions with a deadly contagion . . .

Who lies behind this outbreak?
And why?
The Doomsday Clock is ticking as MI6 operative Luke Carlton races to unravel an extraordinary conspiracy that, if unchecked, could devastate the world.