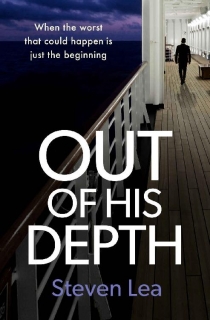 Recently bereaved ex-cop John Barker is enticed back to work by his boss who sends him on a cushy stakeout on Galaxy Starlight, a brand new cruise ship heading for the Caribbean.

When passengers start dying, mysteriously at first, then brutally out in the open, Barker realises there’s much more to it.
Aided by ship-singer Lucy Jones, Barker digs deeper despite repeated warnings, discovers more lives at stake, and that he’s more closely involved than he could have imagined.

Out of His Depth is a story of deception, murder, organised crime, revenge and betrayal, set on one of the world’s most modern and luxurious cruise ships.

The Evidence by Jodie Lawrance

Where is My Mind? by Shirley Benton

If I Should Die by M K Farrar, M A Comley