Out in the Cold by Stuart Johnstone 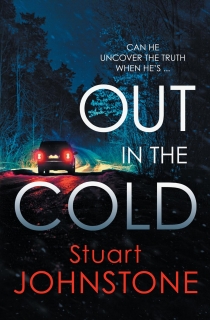 When you work in the police force, intuition is everything, and police sergeant Don Colyear has it in spades. It’s a gift that gets him into as much trouble as it gets him out of. After an incident makes remaining in Glasgow impossible, Don is sent to work in a remote Highlands town. He doesn’t want to be there and the feeling is mutual. His new Inspector wants him gone and the locals wonder why he’s even there. Still, Don makes a go of things, striking up a good working relationship with rookie officer Rowan Forbes.

As Don starts to investigate petty crimes, it soon becomes clear that there is something off about the town. A string of teenage disappearances have not been given due attention. Then there’s the gruesome murder of the groundsman of the local sporting estate. Why is the Inspector reluctant to properly investigate? Could the incidents be linked? As Don delves further into the town’s secrets, it’s not long until his own life is at risk.