Our Daughter’s Bones by Ruhi Choudhary 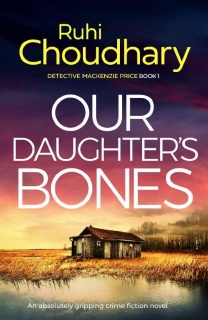 When Mackenzie opened the door to the kitchen, she froze. Her father lay on his stomach, blood pooling around his head. She lurched forward to touch him, but her mother held her back. Mackenzie felt like bursting. Her twelve-year-old heart couldn’t handle the grief. She would never forget that night, nor what her mother asked her to do…
Twenty years later, Detective Mackenzie Price is back in Lakemore, a town where the woods hide the darkest of crimes. Determined to atone for the sins of the past, she is unstoppable in her quest for justice.

When eighteen-year-old Abigail goes missing, Mack is sure the case is linked to that of Erica Perez, who vanished one year before. Mack’s co-workers believe Abby is just another runaway, but Mack isn’t convinced. Abby and Erica were friends, and when Mack finds Abby’s diary, she begins to suspect Abby knew something about Erica’s disappearance. Something that put her in danger.

Then a body is discovered in the woods and the race to bring Abby back alive becomes even more urgent. As Mack fights to keep her in the spotlight, she discovers a shocking secret that goes back decades. But that is not the only secret lurking beneath the surface, as Mack knows only too well.
The first book in the Detective Mackenzie Price series, Our Daughter’s Bones is a haunting and utterly unputdownable crime thriller, perfect for fans of Lisa Regan, Angela Marsons and Karin Slaughter.