Other London by M.V. Stott 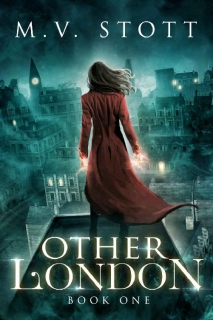 A secret city where magic went to hide. An ancient evil desperate to get inside.
Once, there was magic in London, but when a monster made of hunger came to devour it all, the Uncanny were forced to abandon their home.
And so they fled to Other London, a secret city adjacent to their own, and there they hid, barricaded, isolated from the rest of the world.

For two hundred years, the people of Other London have cowered behind closed doors. No one can get in and no one can get out. Until, one day, the impossible happens: someone from outside finds their way into the hidden city.
Verity Adams has no magic in her—she doesn’t even believe in the stuff—so how on earth did she find herself in Other London? And could she be a sign that something much worse is about to follow her? Something the Uncanny thought they had locked out for good? Something that has been clawing at the door, hungry for magic, for two long centuries…