Orphans of the Storm by Celia Imrie 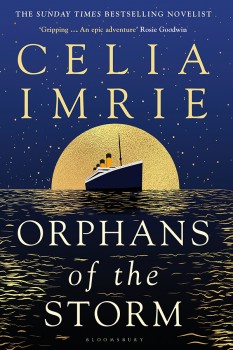 Nice, France, 1911: After three years of marriage, young seamstress Marcela Caretto has finally had enough. Her husband, Michael, an ambitious tailor, has become cruel and controlling and she determines to get a divorce.

But while awaiting the judges’ decision on the custody of their two small boys, Michael receives news that changes everything.
Meanwhile fun-loving New York socialite Margaret Hays is touring Europe with some friends. Restless, she resolves to head home aboard the most celebrated steamer in the world – RMS Titanic.

As the ship sets sail for America, carrying two infants bearing false names, the paths of Marcela, Michael and Margaret cross – and nothing will ever be the same again.

From the Sunday Times-bestselling author, Celia Imrie, Orphans of the Storm dives into the waters of the past to unearth a sweeping, epic tale of the sinking of the Titanic that radiates with humanity and hums with life.