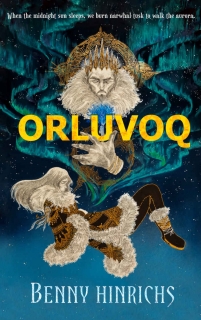 The young shaman Orluvoq finds herself clanless and addicted. Her last hope at survival, a talisman, lies buried with her mother. At the end of the world, an ice cliff reaches down forever. Its frozen face holds all the dead who have ever died.

Shamans burn narwhal tusk to work magic for the clan. Every shaman is taught not to eat the tusk. The high is too great to resist, and their clan will perish from neglect. But not every shaman does as they’re told.

So, Orluvoq must climb down the ice cliff at the end of the world and find her dead parents. Otherwise, she’ll soon join them in the ice. Should she succeed, she can finally move to her real plan. Seduce a king.