Orders of Battle by Marko Kloos 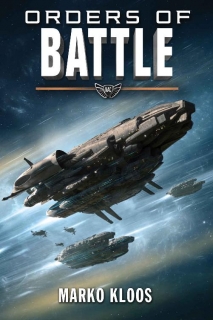 The battle against the Lankies has been won. Earth seems safe. Peacetime military? Not on your life.
It’s been four years since Earth threw its full military prowess against the Lanky incursion. Humanity has been yanked back from the abyss of extinction. The solar system is at peace. For now.

The future for Major Andrew Grayson of the Commonwealth Defense Corps and his wife, Halley? Flying desk duty on the front. No more nightmares of monstrous things. No more traumas to the mind and body. But when an offer comes down from above, Andrew has to make a choice: continue pushing papers into retirement, or jump right back into the fight? What’s a podhead to do?

The remaining Lankies may have retreated in fear, but the threat isn’t over. They need to be wiped out for good before they strike again. That’ll take a new offensive deployment. Aboard an Avenger warship, Andrew and the special tactics team under his command embark on the ultimate search-and-destroy mission. This time, it’ll be on Lanky turf.
No big heroics. No unnecessary risks. Just a swift hit-and-run raid in the hostile Capella system. Blow the alien seed ships into oblivion and get the hell back to Earth. At least, that’s the objective. But when does anything in war go according to plan?