One More Story by John Hennessy 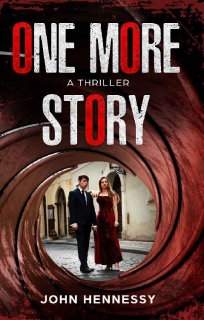 One more kill. One final betrayal. One more story

His wife’s been kidnapped. Only one person knows where she might be. Can he trust her long enough to get out of the Czech Republic alive?
Ellis Goodrich is the best-selling author of vampire horror, high school ghost stories, and noir crime thrillers. For twenty-five years, he has been married and happily so to his high school sweetheart Jane Creed. Ellis is thinking of getting out of the writing business for a while. After writing many best-selling novels, he is viewing his impending retirement as somewhat bittersweet. He is a jaded author who wants to write something different but is not sure what.His wife wants him to pen a special kind of story, just for her.

She hasn’t told him, but a meeting with a gypsy fortune teller reveals a hidden killer inside – Jane is suffering from ovarian cancer, and it’s terminal.If Ellis is somehow convinced to write just One More Story, he might just be able to save her. But then, those that helped him will want payment. Initially accepting, knowing that his success would one day come at a price, on reflection Ellis finds their price a little too high to pay.
And that won’t do. That won’t do at all.