One Half Truth by Eva Dolan 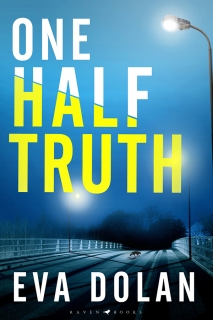 When the police are called to the report of a late-night shooting, they expect it to be drugs or gang-related. They don’t expect to find a young student executed on his way home.

Jordan Radley was an aspiring journalist: hard working, well-liked, dedicated. His first major story – looking at the fallout following the closure of a major local factory – had run recently and looked to be the first step in his longed-for career. Even after the story ran, Jordan continued to stay in contact with those he interviewed: he was on his way back from their social club the night he was murdered.

But as the detectives quickly discover, not only was Jordan killed, but those responsible also broke into his house, taking his laptop and notes. What was he researching that might have led to his death? And can this really be linked to another case – long ruled an accident – in the same area? Or are the police being forced to prioritise those with the best connections rather than the ones that most need their help?