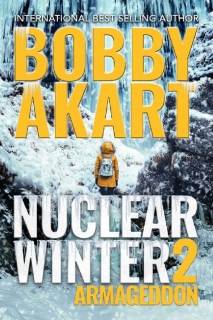 For decades, Nuclear Armageddon hanged over us like a mighty sword.
Some said it would be the war to end all wars.
They were wrong. The real battle against extinction was just beginning.
This is how the world ends. Not with a bang, but with many nuclear bombs detonated around the planet. It was no longer a topic of conversation around the dinner table as in years past.
Nobody was prepared, including the world’s governments. Yet the threat was always real and the devastation was predictable.

The damage was incalculable. Millions died at the points of impact. Nuclear Winter spread across the globe. A rapidly cooling climate shocked humanity and all living things … to their death.
This is more than the story of nuclear conflict. It’s about the devastating effects wrought by Nuclear Winter. Our possible future is seen through the eyes of the Albright family whose roots stretch back to the early settlement of the Florida Keys.
While they fight for survival, they trek across a rapidly deteriorating landscape wrought with danger from both the elements and their fellow man.
It was not our fight, but it became our problem.