Now You Don’t See Me by Alec Peche 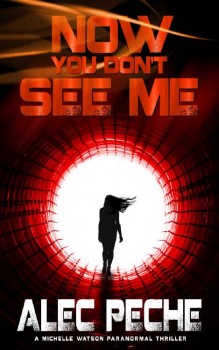 To what extreme would a billionaire industrialist go as an eco-terrorist? Michelle Watson is a CIA Case Officer. Critically injured in the line of duty as a policewoman she discovered a special talent after she was resuscitated. She could teleport herself anywhere on earth as long as she could visualize where she wanted to go. Her two adult children believed she suffered a brain injury when she tried to tell them about the teleporting ability, so she let it go, knowing they wouldn’t understand. She was raised in a small California city and growing up she was the only child in her small paranormal town that lacked a magical talent.

She left the town to focus on life as a police officer. It just took her near-death experience for her talent to appear. The paranormal skill definitely has its limits, but still, she looked for a place to do good with her talent. She decided on the CIA, where she could serve a worldwide role.

The spy agency had a reputation of keeping secrets, and she figured she wouldn’t be safe if the secret of her talent ever reached the general public. For five years, she’d worked without a partner rescuing Americans in tight situations. She’s given a new assignment when the CIA hears whispers of conversation that an industrialist has decided to destroy the world’s oil fields. Michelle and fellow operative Jason Smith are called to investigate if the rumor is true.