No Fear by Ridge King 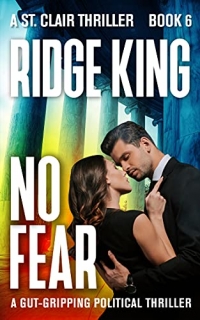 Jack has to battle his way through multiple groups with agendas that threaten his dad’s chances of becoming President, while at the same time trying to keep a lid on the increasingly tempestuous relationship with his girlfriend.
His dad Sam knows the days are running out before the new Congress convenes, and that he’s desperately needed in Washington.
But first, Sam has to bury his wife Sofia. Bedelia Vaughan never leaves his side, knowing she will likely be Sam’s First Lady if he’s named the new President. Everybody thinks Sofia died of advanced cancer. Bedelia knows she didn’t.

After Eve Harrington wrangles an invitation from Norwalk to return to Washington aboard Air Force One to meet the dashing White House curator, surprises await her.
Derek Gilbertson has to balance Vlad Kucherov’s increasing bossiness as they prepare to transfer $27 million to the Bahamas. Watching from the sidelines are Cuban government operatives who doesn’t trust the Russian.
Meanwhile, the British and Russian ambassadors hatch a plot to remove Lord Ellsworth sets in motion the plan he concocted with Russian Ambassador Kornilevski to hire an assassin to remove Hawkins from the equation, thus ensuring the election for Sam.
It all comes to a head at midnight on New Year’s Eve where there are more fireworks on the ground than in the sky.