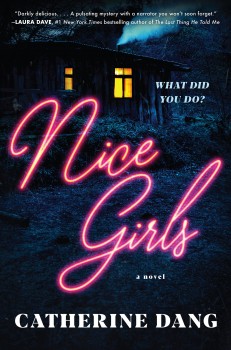 A pulse-pounding and deviously dark debut, written with the psychological acuity and emotional punch of Luckiest Girl Alive and All the Missing Girls, that explores the hungry, angry, dark side of girlhood and dares to ask what is most dangerous to a woman: showing the world what it wants to see, or who she really is?

What did you do?

Growing up in Liberty Lake, Minnesota, Mary was chubby, awkward, and smart. Earning a scholarship to an Ivy League school was her ticket out; she was going to do great things and never look back. Three years later, “Ivy League Mary” is back—a thinner, cynical, and restless failure. Kicked out of Cornell at the beginning of senior year, she won’t tell anyone why. Working at the local grocery store, she sees familiar faces from high school and tries to make sense of the past and her life.
When beautiful, magnetic Olivia Willand, a rising social media star, goes missing, Mary—like the rest of Liberty Lake—becomes obsessed. Best friends in childhood, Mary and Olivia haven’t spoken in years. Everyone admired Olivia, but Mary knows better than anyone that behind the Instagram persona hid a willful, manipulative girl with sharp edges. As the world worries for perfect, lovely Olivia, Mary can’t help but hate her. She also believes that her disappearance is tied to another missing person—a nineteen-year-old girl named DeMaria Jackson whose disappearance has gone under the radar.

Who was the true Olivia Willand, and where did she go? What happened to DeMaria? As Mary delves deeper into the lives of the two missing girls, old wounds bleed fresh and painful secrets threaten to destroy everything.
Maybe no one is really a nice girl, after all.