Next Boy To Die by Arnon Edelstein 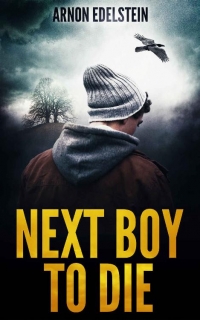 Blond teenage boys begin to disappear… who will be the next boy to die?
Three years ago. Dean, a senior criminology lecturer, lost his fiancée and ever since, his life has revolved around his work, which provides him an outlet from the harsh feelings of guilt around her death.
When a series of mysterious disappearances of teen boys take place, his close friend who is a police officer that has been assigned to the investigation, asks him for help.

Every few days, another boy disappears from his home, with the only common denominator being that they are all blond, blue-eyed, and around the age of fifteen.
As the bodies pile up, the authorities realize they are dealing with an extremely cruel serial killer.
Despite their efforts, the investigation bears no fruits and Dean realizes the responsibility for solving the murders lies solely on his shoulders.
If he fails to find the killer – it is only a matter of time until the next victim…