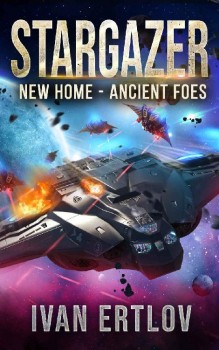 Welcome to the Rim Worlds!
Belonging neither to the Protectorate nor to the Alliance, the almost two hundred planets and moons in three dozen systems are considered the hell-in-space of our spiral arm. Here, pirates are up to their mischief, mad dictators as well as bloodthirsty warlords rule over the outsiders and soldiers of fortune, outcasts and fugitive criminals.

In this chaotic space of outlaws, the powerful mining consortium has lost tens of thousands of workers in an illegal mining operation. All of them citizens of the Protectorate – another reason for Council Speaker Aarashkvachora the Cruel to crunch some consortium heads. But first, she has to launch a rescue operation, which proves doubly difficult:

Her local spies have gone into hiding, and a military or police operation on the formally neutral fringe worlds would jeopardise the fragile peace with the Plachtharr Alliance. And so she sends the Stargazer prospectorate an offer they simply cannot refuse…