Never Tell Them by N.L. Hinkens 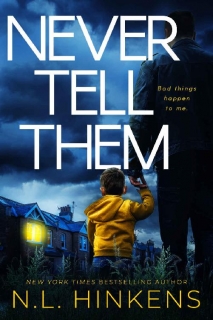 Fear the stranger next door.
When mysterious, single dad Ray Jenkins moves in to the neighborhood, Sonia is suspicious from the outset that something is amiss. Ray’s young son, Henry—traumatized from the recent loss of his mother—acts like he barely knows his father.

But things take a turn for the worse when Ray is involved in a multi-vehicle wreck, and suffers a brain injury and subsequent memory loss. Sonia steps in to care for Henry, but soon becomes alarmed at the disturbing things he tells her. Determined to get to the bottom of who her neighbor really is, she snoops around in his house. The shocking clues she uncovers shake her to the core. Her own life is in danger from the deadly lie he is living.

The more she digs, the more she finds that some lies are best left buried.