Never Forget Me by Jennifer Bacia 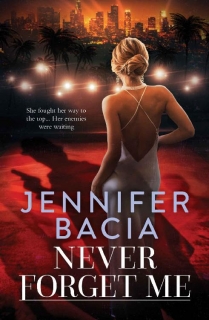 When the powerful are threatened, no one is safe.
Elizabeth Eden was the most glamorous actress of her day. But when she dared to take on the studio system, she paid a terrible price.
Twenty years later, Tess Jordan, escaping a life of crime on the streets of NYC, has become Hollywood’s most powerful studio head. Her first project – the shattering true story of Elizabeth Eden.

Meanwhile the charismatic son of former President Tom Madigan is making his own run for the White House. And Tess soon discovers that the wealthy and powerful will stop at nothing to ensure the secrets of the past remain buried forever.