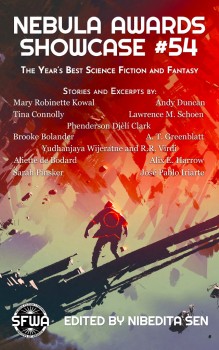 The latest volume of the prestigious anthology series, published annually across six decades! The Nebula Awards Showcase volumes have been published yearly since 1966, reprinting winning and nominated stories of the Nebula Awards, voted on by the members of the Science Fiction and Fantasy Writers of America (SFWA).

“It’s Dangerous to Go Alone” by Kate Dollarhyde
“Into the Spider-verse: A Classic Origin Story in Bold New Color” by Brandon O’Brien
“The Secret Lives of the Nine Negro Teeth of George Washington” by P. Djèlí Clark
“Interview for the End of the World” by Rhett C. Bruno
“And Yet” by A. T. Greenblatt
“A Witch’s Guide to Escape: A Practical Compendium of Portal Fantasies” by Alix E. Harrow
“The Court Magician” by Sarah Pinsker
“The Only Harmless Great Thing” by Brooke Bolander
“The Last Banquet of Temporal Confections” by Tina Connolly
“An Agent of Utopia” by Andy Duncan
“The Substance of My Lives, The Accidents of Our Births” by José Pablo Iriarte
“The Rule of Three” by Lawrence M. Schoen
“Messenger” by R.R. Virdi & Yudhanjaya Wijeratne