Mystery at the Abbey Hotel by Clare Chase 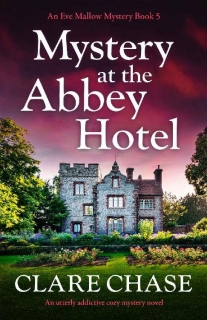 Saxford St Peter is Eve Mallow’s beloved home, but she can’t resist the chance to spend a weekend in the nearby Abbey Hotel, famed for its glamorous owner Debra Moran and an array of celebrity guests. For a confirmed people-watcher like Eve, it’s perfect: she can observe the rich and famous while sipping tea in the gardens, her faithful dachshund Gus by her side.

But her relaxing break takes a shocking turn when Debra is found lying dead in the shadowy woods around the hotel. One of Eve’s fellow guests didn’t come to the Abbey for fine food and delightful décor – but to kill.

When the investigation gets underway, Eve finds herself trapped with a wide range of suspects. Could it be Debra’s new friend Harper, who inherits everything? Her ex-husband Chester, still seething over their messy divorce? Or her estranged sister Amelia, who came hoping for reconciliation, only for Debra to shut the door in her face?
As Eve roams the hotel, searching for clues and hunting down alibis, she uncovers a whole host of secrets. But can she find the truth before the killer brings her holiday to a deadly end?