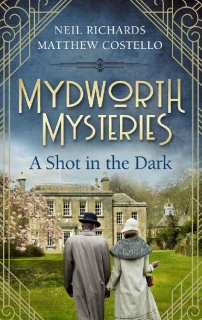 Sussex, England, 1929. Mydworth is a sleepy English market town just 50 miles from London. But things are about to liven up there, when young and handsome Sir Harry Mortimer returns home from his diplomatic posting in Cairo, with his beautiful and unconventional American wife, Kat. No sooner have the two arrived, when a jewel robbery occurs at Harry’s aunt’s home – Mydworth Manor. The police are baffled and overwhelmed with the case. But Harry and Kat have an edge in the hunt for the dangerous culprit: not only do they have certain useful “skills” they’ve both picked up in service of King, President and Country, they also have access to parts of English society that your average bobby can’t reach …

Co-authors Neil Richards (based in the UK) and Matthew Costello (based in the US), have been writing together since the mid-90s, creating innovative content and working on major projects for the BBC, Disney Channel, Sony, ABC, Eidos, and Nintendo to name but a few. Their transatlantic collaboration has underpinned scores of TV drama scripts, computer games, radio shows, and the best-selling mystery series Cherringham. Their latest series project is called Mydworth Mysteries.