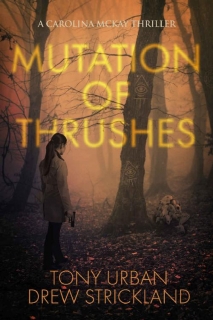 A girl, dead and desecrated. An occult ritual. And one forced confession.
Seven years later, a town wants to forget.
Reeling after solving the murders in Dupray, Carolina McKay is anything but stable. Her mother has kicked her out. She can’t face the only man she’s ever known as a father. And her only friends are little white pills.
It wasn’t the heroes parade she deserved, but then again, nothing comes easy for her.

So, when the perfect mystery presents itself, she has good cause to be suspicious.
Cyrus Mankey, a dying father, is desperate to do right by his son who, seven years ago, was forced to confess to the murder of a girl that he never met.

Carolina is determined to exhume the truth, good or bad. But, after roadblocks in the form of corrupt police and enigmatic townsfolk, she begins to wonder how deep this case goes. When new victims come to light and a local legend enters the fray, Carolina not only questions her own beliefs, but her sanity.
Can she get to the bottom of a murder that the town doesn’t want solved, or will her efforts end with her in a ditch, to be forgotten along with the girl for whom she’s desperate to get justice?