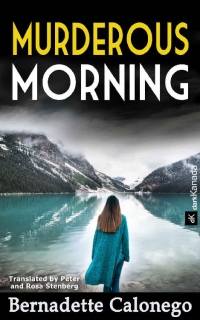 A remote farm in Canada’s wilderness. A man’s lifeless body in the grass. The rooms in the farm house splattered with blood. Three children, brutally murdered. No trace of their mother.
Five years ago, family lawyer Tessa Griffins fled to Vancouver from the isolated mining town of Whatou Lake. Now she returns to her parents’ home there in order to search for the dead children’s mother, her stepsister Fran. And she wants to find the killer – as does Detective Sergeant Ron Halprin, head of a special RCMP unit in Vancouver who is sent to Whatou Lake to solve the case.

Tessa is stonewalled everywhere. What secrets does her father, the respected town doctor, have? And why does her mother, who had welcomed many foster children into their home, suddenly stop telling the whole truth? Is Fran leading a secret life? And why of all people is it Tessa’s former boyfriend, Tsaytis Chelin from the Sitklat’l First Nation, who finds the dead bodies? On the third day, Tessa makes a gruesome discovery. As she crosses the wilderness on the trail of the murderer, she finds herself under a deadly threat.

Bernadette Calonego, a Swiss-Canadian author whose crime novels have been translated into English, has lived in Canada for over twenty years. She splits her time between Vancouver, British Columbia, and Newfoundland. Her stories are inspired by the wilderness and expeditions to the North.