Murder on the Golden Arrow by Magda Alexander 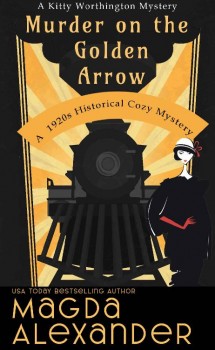 What’s a bright young woman to do when her brother becomes the main suspect in a murder? Why, solve the case of course.
England. 1923. After a year away at finishing school where she learned etiquette, deportment, and the difference between a salad fork and a fish one, Kitty Worthington is eager to return home. But minutes after she and her brother Ned board the Golden Arrow, the unthinkable happens. A woman with a mysterious connection to her brother is poisoned, and the murderer can only be someone aboard the train.
When Scotland Yard hones in on Ned as the main suspect, Kitty sets out to investigate. Not an easy thing to do while juggling the demands of her debut season and a mother intent on finding a suitable, aristocratic husband for her.

With the aid of her maid, two noble beaus, and a flatulent Basset Hound named Sir Winston, Kitty treads a fearless path through the glamorous world of high society and London’s dark underbelly to find the murderer. For if she fails, the insufferable Inspector Crawford will most surely hang a noose around her brother’s neck.