Murder on the Commons by Will North 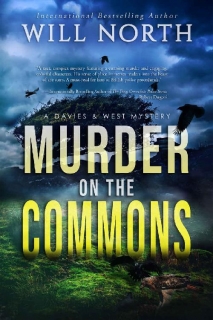 When a hawk-ravaged head of a body is discovered neck-deep in a Cornwall bog, Detective Inspector Morgan Davies and her Scene of Crimes manager Calum West find themselves equally mired in questions and dead-ends. Who is this badly broken corpse on the grounds of Poldue Manor?

How did the body appear there? And why does the lord of the manor’s daughter seem unfazed by her gruesome discovery?

Clues diverge and send the investigative team out of Cornwall and across borders as the team finds itself immersed in unfamiliar waters of both politics and romance. But when shots are fired, there is suddenly more on the line than catching a killer. This time, it’s personal.