Murder in the Magic City by G.P. Sorrells 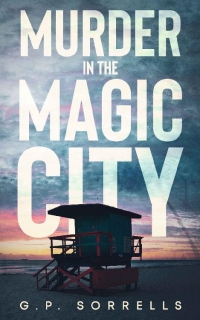 Ross Sterling’s young daughter died at the hands of a burglar sent to their home under the direction of local drug kingpin, Carlos Medina. Trouble was, Sterling had never met the man, nor anyone remotely connected to him. Sterling vowed to avenge his daughter’s death. Bringing her back was impossible, but some way, somehow, he would atone for his failure to safeguard her from the horrors of the world. On the run and out of options, the Organized Crime Agency welcomed Sterling with open arms as he pursued his quest for vengeance.

Micah Brantley never had much of a plan for what life would look like once he reached adulthood. He tried his hand at a life in the military, spending a few years in special ops doing the kinds of operations which often end up with the gory details redacted to all but those with the highest of security clearances. Eventually, his path diverged down a less honorable route. He made inroads with a man who had connections to Carlos Medina, a man eager to make use of Brantley’s specialized combat abilities. Soon, he was sending Medina’s enemies away on permanent vacations; and being rewarded handsomely.

Trouble was, no two roads run parallel forever. At some point, they either converge or reach an untimely end, their tarmac engulfed by the torrential waters of their sins. Such was the case for the roads traveled by Sterling and Brantley. Their paths altered, and sometimes even orchestrated, by outside forces hellbent on producing a reality of their choosing. The two men forged their own path. One separate from the demands of others. A path whose end was anything but certain.