Murder in Peking by Vincent Starrett 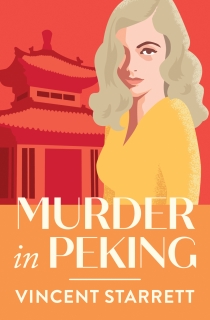 Wealthy businesswoman Kate Webber has rented out an ancient Buddhist temple in the lonely hills west of the city for what looks to be an exciting party. A worldly woman like Kate has all sorts of friends. Among her guests are a museum curator, a painter, a local teacher, an old school friend from Kansas, a debonaire mystery novelist, a travel writer, and even a Hollywood film director. The evening begins easily with smiles, cocktails, and colorful conversations. But the frivolity vanishes instantly with one piercing scream . . .

When the body of a guest is discovered in one of the bedrooms, infamous amateur detective Hope Johnson is on the scene to investigate. With his eye for detail, Johnson aims to uncover which of the other partygoers is a killer. And he better hurry before the night takes an even deadlier turn for the worse . . .