Murder at Christmas by Cecily Gayford 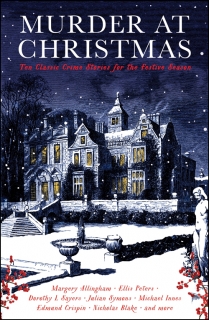 Christmas is a season of overindulgence. For most of us, that means an extra mince pie, a second helping of turkey, or perhaps a third glass of mulled wine. But for some among us, the festive season is a time to settle old scores, dispatch new enemies and indulge … in murder.

Here, ten masters of the genre serve up mystery and mayhem aplenty. From a dowager’s missing diamonds to a Christmas party gone horribly wrong, these classic crime stories will delight, puzzle and satisfy long after the last slice of pudding has been consumed.

The Snapdragon and the C.I.D. by Margery Allingham
Let Nothing You Dismay! by Ellis Peters
The Lion’s Tooth by Edmund Crispin
Rumpole and the Spirit of Christmas by John Mortimer
The Assassins’ Club by Nicholas Blake
The Ascham by Michael Innes
A Scandal in Winter by Gillian Linscott
Waxworks by Ethel Lina White
Twixt the Cup and the Lip by Julian Symons
Nebuchadnezzar by Dorothy L. Sayers