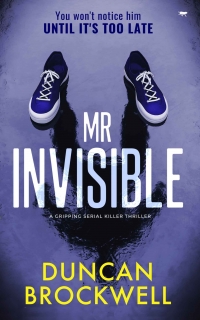 You won’t notice him… until it’s too late. When Detective Inspector David Coates is tasked with finding the killer of a woman found naked and strangled in a bin in undergrowth in East Sussex, he has no idea what he is about to face. With little to go on, he hopes the hummingbird tattoo on the victim’s abdomen will help solve the mystery of her identity. Meanwhile, on the other side of the world, Georgina Shaw, a minor celebrity, receives a message from one of her followers who calls himself Elf Man.

When DI Coates discovers that the DNA on the dead woman’s body belongs to Arthur Peebles, a man who went to prison for murder sixteen years earlier, the investigation is thrown into question. As Elf Man closes in on Georgina, DI Coates realises that the key to the case lies in Australia. Is there a link between Elf Man and the body in the bin? Could Arthur Peebles, now a free man, be up to his old tricks? One thing is for certain; Coates has his work cut out.