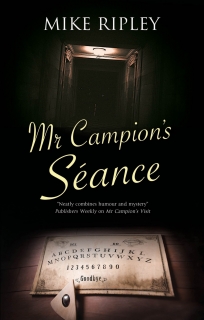 1946, London. The eagerly anticipated new detective novel from Albert Campion’s godsibling, bestselling author Evadne Childe, is proving to be another runaway success. Unfortunately, it has also caught the attention of Superintendent Stanislaus Oates for reasons that go beyond its superior plotting.

The crime at the heart of The Bottle Party Murder bears a number of striking similarities to a very real, recent and unsolved murder at the Grafton Club in Soho.

Evadne wrote the book before the murder occurred, yet predicts it remarkably accurately – is it just a weird coincidence, is Evadne getting her information from ‘the other side’, or is something more sinister afoot? The repercussions of this extraordinary and complex case will reach out over the next fifteen years, drawing in three of Mr Campion’s favourite policemen – Oates, Yeo and Luke – before finally coming to its violent conclusion in 1962.