Mother of Kings by Poul Anderson 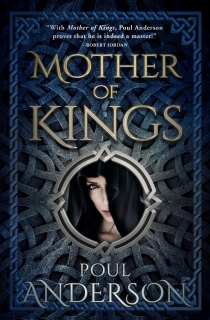 During the tenth century, Gunnhild, the daughter of a Norse warlord, is sent to study sorcery under the auspices of two Finnish wizards. She is able to ensnare as a husband a man she has only seen in visions-the formidable Norse king Eirik Blood-Ax-and bears him nine children. Wielding her magic as a weapon, Gunnhild survives political intrigues and power struggles at Eirik’s side, forging a family dynasty that will cement its place in Scandinavian legend and lore . . .