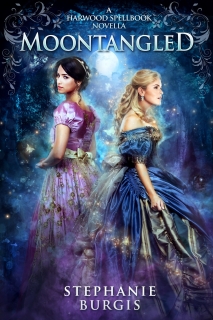 Take one ambitious politician and one determined magician with wildly different aims for their next meeting.

Add a secret betrothal, a family scandal, and a heaping of dangerous fey magic in an enchanted wood…and watch the sparks fly!

For just one moonlit, memorable night, Thornfell College of Magic has flung open its doors, inviting guests from around the nation to an outdoor ball intended to introduce the first-ever class of women magicians to society…but one magician and one invited guest have far more pressing goals of their own for the night.

Quietly brilliant Juliana Banks is determined to win back the affections of her secret fiancée, rising politician Caroline Fennell, who has become inexplicably distant. If Juliana needs to use magic to get her stubborn fiancée to pay her attention…well, then, as the top student in her class, she is more than ready to take on that challenge!

Unbeknownst to Juliana, though, Caroline plans to nobly sacrifice their betrothal for Juliana’s own sake – and no one has ever accused iron-willed Caroline Fennell of being easy to deter from any goal.

Their path to mutual happiness may seem tangled beyond repair…but when they enter the fey-ruled woods that border Thornfell College, these two determined women will find all of their plans upended in a night of unexpected and magical possibilities.