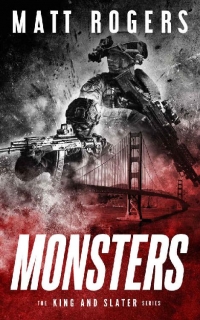 MORE MONEY, MORE MURDER…
Heidi Waters, CEO of billion-dollar startup Vitality+, is all the rage in Silicon Valley. Her company’s promises to roll out a neurochemical cure for caffeine-related anxiety are set to change the game, a godsend for anyone who’s ever got the jitters from upsizing their morning coffee order.

There’s just one problem.
There is no cure. The product doesn’t work.

A former acquaintance tips Alexis off to the ten-figure sham, warning that Heidi will do anything to remain in the limelight. After all, it’s often impossible for sociopaths to admit defeat. As Alexis sets off for California, King and Slater follow, embroiling themselves in a criminal web that encompasses a grungy and thuggish mixed-martial-arts gym on the edge of San Francisco.
Doesn’t take them long to figure out that it’s all connected…