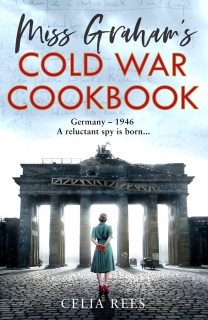 Germany, 1946
A reluctant spy is born…
An ordinary woman. A book of recipes. The perfect cover for spying…
Sent to Germany in the chaotic aftermath of World War II, Edith Graham is finally getting the chance to do her bit. Having taught at a girls’ school during the conflict, she leaps at the opportunity to escape an ordinary life – but Edith is not everything she seems to be.

Under the guise of her innocent cover story, Edith has been recruited to root out Nazis who are trying to escape prosecution. Secretly, she is sending coding messages back to the UK, hidden inside innocuous recipes sent to a friend – after all, who would expect notes on sauerkraut to contain the clues that would crack a criminal underground network?

But the closer she gets to the truth, the muddier the line becomes between good and evil. In a dangerous world of shifting loyalties, when the enemy wears the face of a friend, who do you trust?