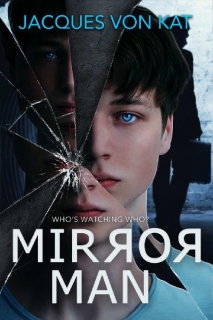 There are two things twenty-one-year-old John-Michael wants most in life; to be accepted and to be treated like an adult.
But John-Michael has an odd compulsion which is hindering his efforts towards acceptance; an urge that leads him to follow and mirror the men around town in search of something he can’t explain.

Until a strange man in a blue suit appears in the town. A man who doesn’t belong there, and who has a suspicious curiosity for the antique shop where John-Michael works. What’s more, John-Michael’s boss Claude grows progressively more anxious as the man in blue creeps ever closer.

When John-Michael arrives to work one day to find Claude cowering in fear, he has no choice but to abandon his odd ways to get to the bottom of the mystery threatening everything he knows before the man in blue turns his sights on him.