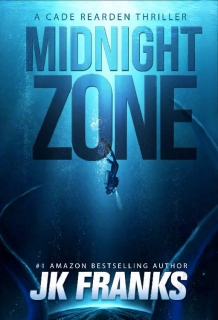 Nightmares are real in the cold dark waters of the deep.
National security agent Cade Rearden is used to secrets. Assigned to protect the ultra-dark organization known as The Cove Project, he grapples with his role of defending a country still in crisis after a deadly super AI has devastated much of the U.S.

But when part of his team mysteriously disappears beneath the idyllic waters of the Caribbean, Cade finds himself thrust into a web of lies and mystery, at the heart of which lies an eons-old secret that somebody will kill to protect. Grappling with his inner demons and struggling to locate his friends, Cade stumbles upon a government cover-up… and terrifying creatures hidden miles beneath the surface of the ocean.
This is the Midnight Zone. Where deadly super-organisms rise from the crushing abyss.

In a desperate race against time, Cade must unravel the truth with the help of Cove’s brilliant computer Doris and discover what happened to his friends. But his search soon puts him in the cross-hairs of a ruthless cabal—one that will stop at nothing to stay hidden and preserve what they have created…